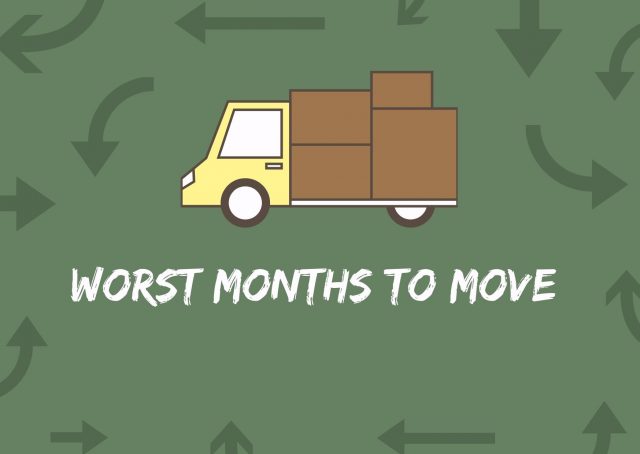 Moving from your current home to a new residence entails a lot of factors. Before moving you must select an apartment or house, choose the right neighborhood, hire a reputable moving coming like Sinclair Moving & Storage, and pack your items. Because of all these hustles, most people easily forget to pick the best time to move, though it’s very essential. This article tells you the worst months of the year to move.

Most people who’ve rented apartments prefer moving at the end of the month because that’s when most rental contracts start and end. If you book your move during this period, you may end up paying higher costs because it’s considered a peak.

Therefore, if you can move in the middle of the moth, take advantage of the opportunity because it’ll save you money and give you a variety of moving companies to select. That way, you may end up getting the best services and discounts. However, if you have to move at the end of the month, it would be best to plan in advance.

If you intend to move during major holidays, you may have to grab your calendar and select other days. Holidays are among the worst times to move because there’s a lot of traffic on the road than other times of the year. This may cause you some major headaches and make you arrive late at your residence.

Also, some moving companies close during holidays, making the few who’re operating overwhelmed by the great number of jobs. Because of this demand, prices may increase.

Summers are among the busiest months of the year because most people plan to move during this time. That makes most moving companies to be occupied during this time. Therefore, finding competitive prices will be difficult. Because of the high numbers of moves, you may have to wait for long before finding an appropriate date.

And even if you’re lucky to get one, it may throw your schedule off balance or require you to make some drastic changes. No one would wish to move with many inconveniences at stake. That’s why it be better to plan your move just before or a few months after summer. Furthermore, it would be best to avoid the long weekends during summer because they’re the busiest.

Winter can either be the best or worst time to move depending on your schedule and intentions. If you want to save some money, it’s probably the best time because less people are moving during this season. However, the unpredictability of the weather can make moving quite complicated for you. Coupled with that, the winter traffic and terrain can slow down transportation and make you arrive at your destination late.

There are the best times and worst times to move in the year. For a smooth transportation process, it would be best to avoid busy periods.

HERE IS A GUIDE TO PREPARE YOUR HOME FOR A MOVE

Things To Ponder To Land On The Ideal Leatherette Sofa